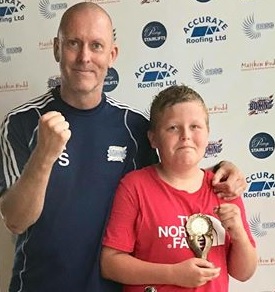 Pevensey Sailing Club, the usual venue for Eastbourne Boxing Club’s awards ceremony once again hosted a fantastic evening. Whilst the BBQ roared on, several awards were up for grabs as well as recognising the hard work from all of the volunteer coaches and staff.

Club Youth Coach Paul Senior said, “Every year these awards get harder to give as the level of boxing keeps getting better. But, we also wanted to recognise individual achievements away from competition. That’s another part of what we’re about at EBC – being impactful to all of our members, not just those who compete under the lights!” Junior Coaches Adrianne Phebey and Donna Hinton presented the awards for their junior boxers (aged 5-9 years).

Fayed Miah was awarded the most improved senior boxer whilst Omid Raouf took the best boxers for his exceptional season. Three more significant achievements trophies were awarded. Will Glazebrook for his perseverance and unwavering approach to his learning and development. Lucy ‘Quiche’ Kisielewska for winning the prestigious Haringey Box Cup and captain Adrianne Phebey for representing England in the 3 nations. Omid Raouf also won best bout award for his mesmeric encounter at the Metropole hotel versus Brighton and Hove’s Connor James.

The presentations swiftly was followed by the traditional soaking of the coaches on the beach where the boxers are afforded the chance to claim revenge by throwing buckets of the English channel all over their coaches!

EBC would like to thank all of the community for their amazing support over the season.