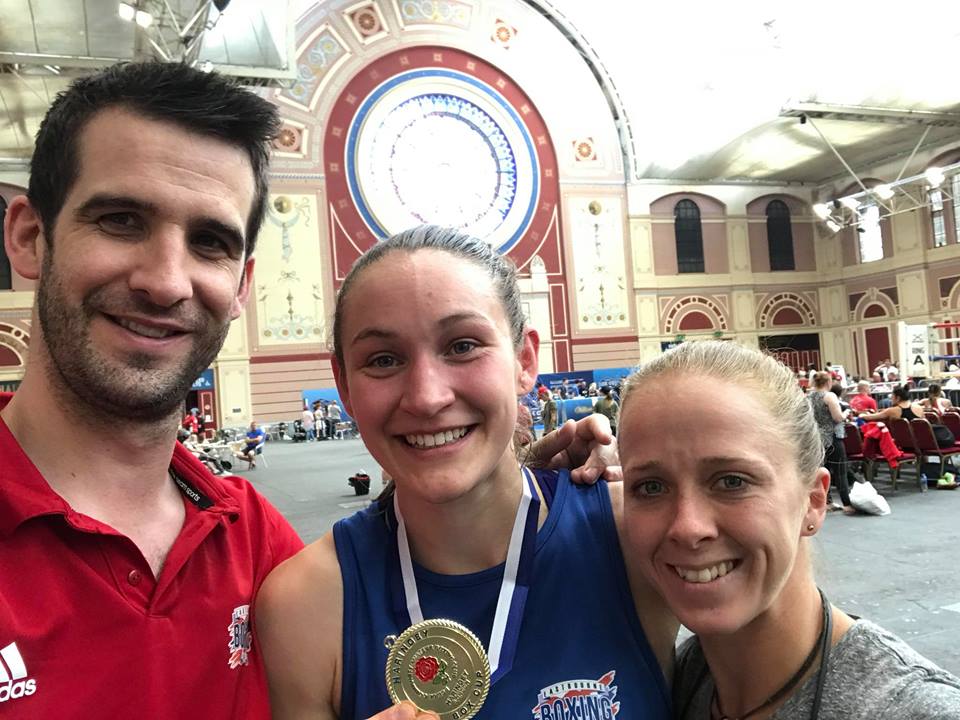 Billed as the biggest club competition in the world with clubs from all over the world, Lucy drew the tough and durable Tennessee Ross of the Royal Artillery Boxing Team. Ross was the aggressor pushing forwards trying to cut off the ring. Lucy moved her feet quickly and used the ring well to find space, landing eye catching counters. The check hook worked well as her opponent continued to push forwards. As the bout progressed Lucy took some shots off the oncoming Ross but was able to maintain the gap well to score effectively eventually taking a 4-1 split decision in her semi-final.

Progressing to the final, Lucy drew the tough and gritty April Hunter of the Howden Boxing Academy from the north east.

“We watched her semi-final so knew she meant business. She was aggressive with the straight shots and looked calm, picking her shots well. The key was to not let her set her feet.”

Coach Adam Haniver said, “Lucy was nervous, we saw how strong Hunter was but this gave us the insight to choose the right tactics.”

The final started as we expected, with Hunter pushing forward having some success with her combinations as she pushed in to mid-range. Lucy kept mobile and caught her with the hook and rear hand as she moved in. Lucy took her foot off the pedal in the second and Hunter managed to close the gap more. It looked all even after 2 rounds. The work rate had to pick up. As Hunter piled forwards, Lucy still managed to produce the eye catching shots to sway the judges her way. A nervy wait for the result to be announced saw Lucy take the win on a very close 3-2 split decision to become the Haringey Box Cup Champion for 2018.

“This is a very prestigious competition. Most of the top Olympians and pros you see have all competed and won this competition, it’s a great stage which mirrors international competitions where the boxers can box up to 5 times in 5 days to win international titles. It was great to see Lucy managing the intensity and demands that Haringey can put on you. The prep for the box cup went well, sparring with many of the boxers in Eastbourne as well as the experienced Adrianne Phebey who just boxed for the first time for England in the 3 nations.”

Female boxing is on the rise and Eastbourne Boxing Club certainly are adding to the movement.

“Lucy is a national development finalist and Haringey Box Cup Champion. Adrianne is now an England boxer. We have Camille Obligis and Emma Loch all making inroads in to the amateur scene. A new addition to the team is Light-flyweight Becky McMullin who is an open class boxer who will look to make a dent next season in the women’s scene. Adrianne also coaches EBC Women, a class run every Tuesday 6.30-7.30pm where women can come and try their hand at boxing in a safe and engaging environment under the wing of Adrianne who is also a fully qualified L2 England Boxing Coach who has worked as a at the 3 nations championships as both a coach and boxer on separate occasions. If you would like to join the great family we have at EBC Women, drop Adrianne an email on adriannephebey@yahoo.co.uk