Eastbourne Boxing Club’s held 15 top class amateur boxing bouts at Skateworld on Saturday May 6th May 2017 in front of a packed crowd of boxing fans.

Eastbourne’s Daniel Legg started the action in his skills bout against Ryan May of Shaun Brown Boxing Academy Worthing. ‘Legg’ was aggressive from the start pushing his opponent on to his back foot using crisp straight shots. As the bout developed, the Eastbourne Featherweight was able to mix in body shots to slow his opponent. There are no decisions in ‘skills bouts’, but Leggy was dominant throughout with a great display of poised and accurate boxing.

Lightweight Callum Lucas was next up in the red corner for Eastbourne, pitting his wits against a tall, rangey southpaw in Ben Abbot of Winchester. In a real to and fro affair, both boxers were scoring, with Callum taking the first. As the bout progressed, the Hampshire based boxer was able to get on his toes and score with his straight shots and higher workrate. The power coming from Callum, but the volume from Abbot. The decision going to the blue corner.

The exciting Light-welterweight Mubanga ‘Banga’ Chisanga matched up against unbeaten Omar Barry of Gym01, Portsmouth. Both boxers landing impactful shots and displaying grit and skill. In a bout that ebbed and flowed, the visiting boxer managed to pull away in the later rounds, working well behind his jab. 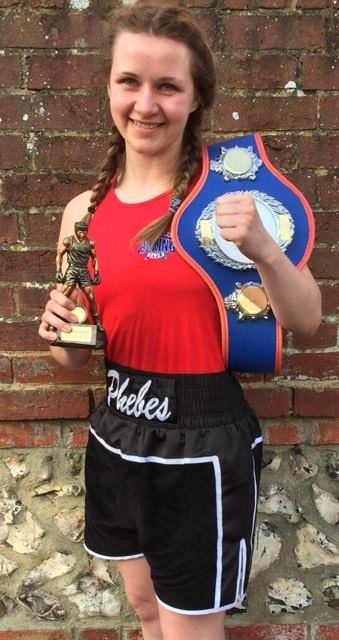 Club Captain and crowd favourite, Adrianne ‘Phebes’ Phebey looked to taste revenger against Anelle Massey from Rumbles Boxing Academy Sittingbourne in their 3rd encounter. The latter being the victor in their first two match ups. On the back foot, Massey was able to use the ring well to score with the jab and move out of range in the first round of their elite standard bout. Phebes needed to close the gap and take it to her opponent to deny her space. On the front foot now, Phebes pushed in to range to take negate her jab more and more to show a classy mixture of combination pressure boxing. Massey began to tire, Phebes looked the fitter. Come the close of the 2nd round, honours were even. ‘I had to work, I could see her tiring. I knew I had to keep this at short to mid range and push her back’. Phebes took the 3rd round but it was by no means settled by the final decision. In a split decision, the Eastbourne Captain’s hand was raised.

Club Coach Adam Haniver said, ‘I’m delighted for Adrianne, she has lost to Anelle twice before. For many boxers that would play on their mind, but for Adrianne, it added to her motivation. She boxed to the plan and it all went perfectly despite a classy opponent in front of her. She is the definition of perseverance and an example of leadership to all at the club. That’s why she is the captain! It was also announced as bout of the night.’

Welterweight Dan Pert lost a points decision to Odyssey’s Akash Dhesi. The Surrey man was able to use excellent trunk movement to make Perty miss. Despite a late barrage from Perty giving his man a standing count with several scoring blows, it was not enough. A very skilful bout with two excellent lads with great futures.