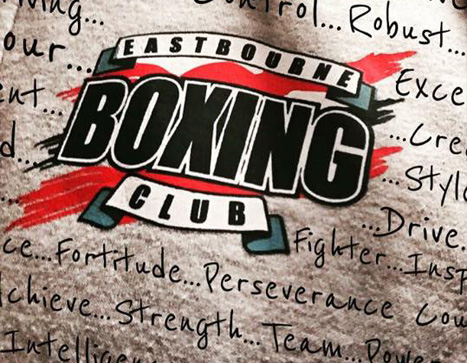 Say it with words

20 of the most inspirational & motivational boxing quotes ever.

1“Bruce Lee was an artist and, like him, I try to go beyond the fundamentals of my sport. I want the public to see a knockout in the making.” – Sugar Ray Leonard

2 “Rhythm is everything in boxing. Every move you make starts with your heart, and that’s in rhythm or you’re in trouble.” – Sugar Ray Robinson, considered by many to be the greatest boxer of all time.

3“The question isn’t at what age I want to retire, it’s at what income.” – George Foreman at age 45, on his fight with Michael Moorer

4“His mouth made him feel like he was gonna win. Not his hands, I had my hand. He had his lips.” – Joe Frazier on his fight with Muhammad Ali

5“The tempt for greatness is the biggest drug in the world.” – Mike Tyson

6“He can have heart, he can hit harder and he can be stronger, but there’s no fighter smarter than me.” – Floyd “Money” Mayweather Jr.

8“Sure the fight was fixed. I fixed it with a right hand.” – George Foreman on his fight with Michael Moorer

9“The loss just made me hungry; it made me want to go out and win another title.” – Thomas “Hitman” Hearns on his first loss to at the hands of Sugar Ray Leonard

10“The fight is won or lost far away from witnesses—behind the lines, in the gym and out there on the road, long before I dance under those lights.” – Muhammad Ali

11“In order to be at the top and maintain your focus you have to have something that motivates you. For me, it was what I perceived as a lack of respect from the boxing world as well as the media, which made me want to work so hard and be great.” – “Marvellous” Marvin Hagler

12“He saved my life, he saved my career. I can’t thank him enough for the chance to fight him.” – Ken Norton, 5-1 underdog seizing his opportunity and winning his fight against Muhammad Ali.

13 “Getting hit motivates me. It makes me punish the guy more. A fighter takes a punch, hits back with three punches.” – Roberto “Hands of Stone” Duran

14“The hero and the coward both feel the same thing, but the hero uses his fear, projects it onto his opponent, while the coward runs. It’s the same thing, fear, but it’s what you do with it that matters.” – Legendary trainer, Cus D’Amato

15“The possession of muscular strength and the courage to use it in contests with other men for physical supremacy does not necessarily imply a lack of appreciation for the finer and better things of life.” – First black world heavyweight champion, Jack Johnson

17“I’m not God, but I am something similar.” – Roberto “Hands of Stone” Duran

18“To see a man beaten not by a better opponent but by himself is a tragedy.” – Cus D’Amato

19“I was painfully initiated into boxing, because the guys I fought were a lot bigger than me.” – Sugar Ray Leonard

20“Boxing is the toughest and loneliest sport in the world.” – Frank Bruno